​a video journalist and social strategist passionate about improving how you receive news on mobile platforms.
I have extensive experience in social video and Instagram Story production, and I’ve worked on a team that produced content for Snapchat Discover.

Currently, I produce and edit host-driven YouTube news videos for my colleagues' channels at The Wall Street Journal.
Previously at WSJ, I produced social videos on tight daily deadlines for 2 years and published more than 600 pieces. ​Below are 2 examples of my work.

#WSJWhatsNow: We’re wrapping up a big week of earnings reports. Who won? Who lost? @paulvigna has the breakdown. https://t.co/CDvc3sdTzy pic.twitter.com/VmjMMMhjBk

Fans waited in massive lines for Popeyes’ chicken sandwich but @WSJheard explains why brands will need more than a viral sensation to compete in a tough fast-food market. #WSJWhatsNow https://t.co/jF0nFObCqQ pic.twitter.com/4JPkZa4Iv0

Before WSJ, I worked at The New York Times as an Instagram editor, video editor, Snapchat Discover writer and social media intern. 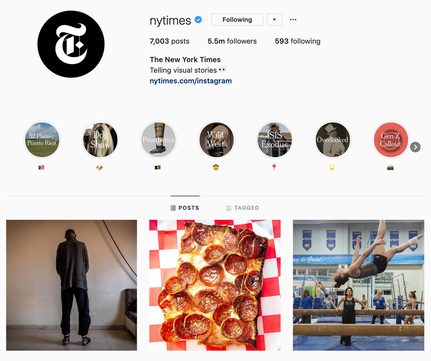 And as a Snapchat Discover writer, I was part of a team of editors and motion designers that built daily editions of Times news content specifically for Snapchat Discover. I wrote and edited text to transform Times articles into concise, mobile-friendly vertical stories with designers.

​Here's an example of my work.
​
As a social media intern at The Times, I assisted with Instagram strategy and Facebook and Twitter publishing. In 10 weeks, I made more than 100 Facebook photo posts and produced 15 Instagram Stories. Here's one below.
​
While working at “NBC Nightly News” in New York, I storyboarded and edited a digital video that received more than 30 million views on Facebook. You can watch it below. (It’s about a 7-story replica of Noah’s Ark that was being built in Kentucky.) I also produced several other viral social videos and wrote the evening newsletter alongside digital staff.
​
At CNBC, I pitched and produced more than 20 social videos for a team that was working to grow the outlet’s following on Facebook. Here’s a breakout video that received more than 600,000 views. It’s about The Bucket List Family. They've been on a permanent vacation ever since dad sold his company for $54 million.
​
​As executive editor at USC Annenberg Media – a newsroom of more than 200 journalists – I instituted a workflow that supported social content production and a more platform-agnostic mindset. I also played a pivotal role in the creation of a weekly Snapchat news show that brings USC 3 of the most important campus stories of the week. I helped conceptualize, host, launch and edit the product. ​
​
​While leading a team of social content producers at USC, I oversaw the production of more than 150 social videos, like the one below. This a story you may have seen on TV – but USC Annenberg Media covered it first. In 2017, a local bike repair man was forced to take his business off USC's campus due to a non-compete clause in a new bike shop's contract. Our video on the story engaged the campus community, bringing in thousands of reactions and more than 370,000 views. This is USC Annenberg Media's second-best performing video. I oversaw this video's storyboard, script and post production process. I also helped edit the video.
​
Fun fact
My undergraduate career was funded by Bill and Melinda Gates, and NowThis, a millennial social video outlet, produced a story about it! Check it out!